I am now on SoundCloud! 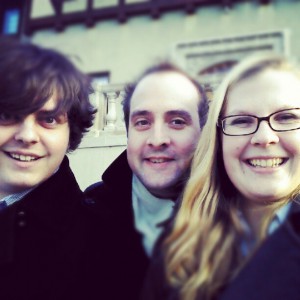 My friend and I picked up composer Tarik O’Regan from the local train station the other day. It was a good day.

After being strongly urged to join SoundCloud, I finally did it. I think it was a good choice ultimately, because it will allow me to network with other composer friends I know. I hope choosing SC will allow me to expand my horizons a bit composing-wise.

I’ve changed the Music page on this blog so it now just shows a big ol’ SC widget rather than my tracks with the description on them – so it’s a lot, lot cleaner looking, actually, However, I realized after I changed the page that I have some explaining to do, because almost All the content I uploaded is brand-new, and most of the content I had on the site is gone.

To clarify: no, I have not reposted Oedipus Rex¹, Salley Gardens, Ver Frigidus², Organized Insanity², the whole dang Ordo ab Chao suite², A Distracted Isolation, Ver Calidus¹, Kuusisto¹, Beyond the Barrier, Over the Fence¹, The Beat of my Own Drummer, An Sléibhte na hÉireann, or Searching for Sight¹.

RETROACTIVE EDIT:
1 – I actually did re-post this tune later on; check the music page.
2 – I’m working on a new version of this and may post it later!

Instead, I am happy to first introduce two new revisions of the Over the Fence Theme and Searching for Sight, both featuring actual guitar and stuff. I’m particularly proud of the OTF Theme revision (which is pretty robust), it’s a lot of fun and I think you’ll enjoy it too.

I’d also like to introduce a bunch of new tracks, some of which I had been intending on posting to this blog: Dragons in the Sky, Seven Billion, Bottles, Battle! Champion Maurus, and Passing on the Right, which as of now is still in the W-I-P phase.

Dragons and Seven Billion are two tracks I had wanted to announce under a “Music 219” post, the reason being that they had both been produced in my class MUSIC-219, Electronic Music. They’re both considered “tape music” or “musique concrète,” in that they’re made with synthesizers and/or synthesized source audio and compiled together. Of the two, Seven Billion is the more “experimental,” however; Dragons has a more noticeable groove to it.

Bottles is quite a different piece – I usually do music that’s a bit heavier, but instead I just wanted to make more of a “fun” song. And a song in which I sing in. There are some prog elements to be sure, but it’s a lot easier on the ears than some of my other work is. I want to make some more songs like this in the future. However, I don’t quite consider it done yet, as there’s quite a bit of work I still feel needs to get done on this track, not the least of which are recording a live drum track and re-recording the vocals and guitar parts.

Battle! Champion Maurus came about because I was playing Pokémon White over Summer 2012, and I was reminded of an idea I had to create a Pokémon-inspired track. Plus, I was teaching myself guitar, so it was a good outlet. As you can imagine, it is essentially an homage to the music of the Pokémon games, for the most part composed by Junichi Masuda, and there are more than a few nods to some of the music from the games. Like “Bottles” and “OTF,” I was really surprised by how fun a track I could make. Hopefully I will make more “fun” music like this in the future.

Finally, “Passing on the Right” is a brand-new track, only a few days old as of this posting. It’s based on an idea that has been rattling around in my head for a while now, and while I’m not 100% comfortable with this cut (it is again a work-in-progress), I’m glad to have finally gotten it down. It is inspired by road rage, and is heavily influenced by the King Crimson albums THRAK, The ConstruKction of Light, and The Power to Believe.

So why did I get rid of so much of the music? A few reasons, actually – one being that SoundCloud has an upload limit, so it’s in my best interests not to upload all of my music, but the perhaps more important reason being that I simply don’t feel a lot of the tracks accurately represent my current skill level, and I don’t feel comfortable having them represent me by putting them online, even if I were to label them as only “works in progress.”

That being said, there are a few tracks I hope to make revised versions of, including both of the Ver’s, Organized Insanity (and let’s be honest, a revision has been a LONG time coming), Kuusisto, The Beat of my Own Drummer, and An Sléibhte na hÉireann. Most of these are just matters of re-arranging, lengthening, and actually recording with live instruments (Sléibhte is an example of a track that just doesn’t sound good unless it’s live), but I don’t want to put them up in their current forms.

As for the rest, well, I’m not re-doing some of the older stuff because I don’t think there’s a point (though I may post some of my EVEN OLDER tracks), the vocal stuff I don’t feel comfortable posting because I’ve matured so much since then that the tracks sound frankly bad to me now, and the whole Ordo ab Chao situation is… complicated. Pt. 3 is pretty solid, but Pt. 1’s a mess, and I’ve been working on a new Pt. 2 since 2011 and have never produced a result I felt happy with. So we’ll see, but don’t get your hopes up.

Anyway, that’s the situation with my music. I’m fortunate to be in a period of high creative energy right now. Vassar just had its annual ModFest, a celebration of modern art, and I got to speak with many very intelligent contemporary composers whom I have a lot of respect for.

I’ve also started a new YouTube channel, with the hope of eventually making some new quality content, so stay tuned: Both my new YouTube channel and my SoundCloud page are “MaurusMultimedia,” a name I thought much more suitable than my previous internet alias “MaurusRehMahrntahn.”

You’ll be hearing from me!