“Kuusisto” returns as “The Blind Scholar” 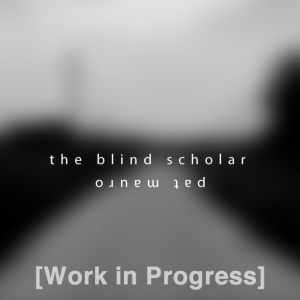 Those who follow my blog (does anyone follow my blog? I actually have no idea) will remember my music piece Kuusisto. Working on Kuusisto was kind of a big milestone for me. Believe it or not, it sort of changed the way I thought about music, and it really helped pave the way for the rest of my stuff. Mentally, I even separate my stuff as pre- and post-Kuusisto.

So some might have been surprised when I launched my SoundCloud account and did not feature Kuusisto. Well, the problem is it hadn’t aged very gracefully, and I no longer felt like it represented the quality of the music I was working on.

Since then I actually had been tinkering with it in the background, trying to figure out what direction I wanted to go with it, but never actively. I’d been doing the same with a lot of my older pieces, actually. But a big turning point was when I received my brand new Yeti microphone this winter. Having that kind of recording quality meant I could now work with more live elements, and fast-track reworkings of earlier projects.

Of course, I was busy finishing up my senior year, so I didn’t have that kind of time – but recently I had the opportunity to participate in a game enthusiasts’ music festival called D’nipalooza, which gave me an excuse to brush up some of my music. As a result, I was finally able to put that new coat of paint on Kuusisto – which I’ve now re-titled The Blind Scholar to make it a little more accessible.

I’m still calling it a work in progress, though, because I don’t quite consider it done. The new drumkit soundfonts are much better than what I had before, but they still sound pretty terrible in a few spots. I’d really like to replace the drum track, as well as the bass track, with live recordings if at all possible. I also think something seems a little off about the piano part in this version, so I may want to adjust that a little.

The Blind Scholar, as well as new versions of Over the Fence and Bottles, can be seen on my SoundCloud page. Together with The Champion, they make up my set from D’nipalooza – Retroactive edit: I actually ended up deleting that playlist sometime after (though all 4 tunes are still on my SoundCloud) – but here’s “The Blind Scholar.”